A rather disorganized story in the Washington Post today examines the non-violent conflict-resolution education programs that have been popular for kids over the last decade as one of the roots of widespread opposition to the war among young people.

For a decade, our children have been taught at school to use their words, not their fists, to settle a score with a classmate. And to do so politely, after listening to the other kid’s side of the story. […]

“Americans are dictating for the Iraqi people what a ‘good life’ looks like,” says Puneet Gambhir, a sophomore at Thomas Jefferson High School for Science and Technology in Alexandria. “Why didn’t we communicate directly with the Iraqi people, ask them what a government for their families and friends would look like, allow them to buy into our dream? We never created buy-in.”

“I hear this all the time from my 19- and 20-year-old students,” says James Garbarino, a professor of human development at Cornell University. “They say they’ve been told to use their words, seek compromise, walk away from provocation, work with those in authority for a peaceful solution.”

All of this ignores, of course, the reality that non-violent conflict resolution in ordinary interpersonal relationships is almost always backed up by the threat of state violence. These days, if a high-school student fails to resolve his conflict with another student in a non-violent way and resorts to assault, he’ll almost certainly be expelled from school and charged as a criminal. If found guilty as a first offender, he’s unlikely to actually be incarcerated, but the threat is there.

Attempting to apply rules for people living in a lawful state to the actions of sovereigns, and expecting anything but disaster, is at best silly and at worst idiotic. And, in the current case, this approach ignores the fact that the United Nations, which is supposed to create some kind of ‘rule of law’ among sovereigns — has been attempting to solve the Iraq crisis in a number of non-violent ways since the invasion of Kuwait in 1990. It hasn’t worked.

The Post story quotes a student who helpfully points this out:

Zach Clayton, student chairman of the National Association of Student Councils, wonders whether the interpersonal skills taught in school should even be applied to international relations. “We’re quick in third grade to teach nonviolent resolution strategies,” he says, “but by our junior or senior years in college we know that countries can’t always play paper-rock-scissors.”

Non-violent resolution of conflicts is definitely preferable to getting into a fight or going to war; even Donald Rumsfeld would admit that. But when the schoolyard bully continues to threaten you and to take your lunch money despite all your efforts at negotiation and your explanations of why this is wrong, violence might well be preferable to continuing to live in terror.

Tinotopia Update
Not Dead Yet

Tino has been busy with other things for the past couple of weeks. Don’t fear, though, he’ll soon be back with loads more complaining for your benefit.

All headlines from the Washington Post. Just kidding. The Post did, however, recently have a story headlined Density Limits Only Add To Sprawl, which is in about the same class.

I shouldn’t make fun; writing headlines is hard work, and most of the dumbest headlines are the result of someone trying to find something that’ll fit and that can be written in twenty seconds. But still, this one is quite a doozy: Density Limits Only Add To Sprawl. Every definition I can find for sprawl involves the phrase ‘spread out’, and it seems rather obvious that regulations requiring houses to be built on 5-acre or larger lots would cause them to spread out.

Unfortunately, requiring that people live on five-acre plots is exactly the wrong thing to do. The suburbs originally promised escape from the crowded and inconvenient cities. We now see, though, that once enough people live in the suburbs, they’re just as crowded-feeling and a lot more inconvenient than the cities were.

And what’s worse, while we’ve got technology to mitigate some of the problems of the cities — mass transit, mainly — there’s not much you can do with the suburbs. The suburbs’ main problem is one of transportation. While you’re at home, the ‘burbs are relatively pleasant, and while you’re in the big-box store, they’re convenient. The experience of getting between the two gets worse and worse. The suburban density is far too low for walking or mass transit systems to be viable means of getting around, and it’s too dense to get around by car — unless you don’t mind a net speed of about 10 mph as you sit in traffic. Most people mind.

The current political wisdom is that the suburban nightmare can be cured by leavening the mix with Open Space — conveniently ignoring that the current suburbs have plenty of open space, mostly in the form of parking lots, and they’re already problematic.

The Open Space that the politicians seem to favor, though, involves trees and lawns on private property surrounding houses. While trees and lawns (and even Open Space) can all be very pleasant, has it not occurred to the Powers What Be that the people living in the midst of all this open space will still have to work, shop, and go to school? Do they believe that offices, stores, and schools will scale themselves down and intersperse themselves nicely among these 5-acre homesites? Do they propose to even allow these stores etc. to do this, in the extremely unlikely event that they’d want to? Of course not. The non-residential uses will still be smeared out along an awful commercial strip that’ll be no less horrible than the commercial strips of today. And the strip will be clogged with cars, much as it is today — except that the people in the cars will have spent far more time in them before encountering the traffic jam. Ah, progress.

[N]o one who applied economically informed strategic thinking to that merger would find any reason for it. What could these companies do as a single entity that they couldn’t do through business contracts between separate companies?

She quotes a recent article from the Wharton website that backs up her thinking.

Now, I’m no big-city businessman or New York Times economics columnist [tugs at suspenders, sucks teeth], and I wouldn’t presume to second-guess the astute judgement of Ms. Postrel or the fine folks at Wharton, but I have to assume that they’ve been smoking something a bit more powerful than Old Golds.

To say today that the AOL Time Warner merger was a misstep does not require a lot of prognosticative ability. But to say that it was a bad idea because the companies could have achieved their goals through contractual relationships requires some sort of particularly cloudy thinking.

When AOL bought Time Warner, AOL was trying to ensure that the AOL service would continue to be a viable business proposition. The service had been in steady decline (not according to subscriber numbers, maybe, but definitely in utility) since they had moved to a flat-rate billing scheme in 1998. Flat-rate billing meant that content providers would no longer get a check from AOL each month, representing their cut of the revenue generated by time users spent looking at their content. That, in turn, meant that almost no compelling content remained exclusive to the AOL service.

The value of Time Warner, in AOL’s eyes, was that it had an enormous library of media from which to draw. With Time Warner, AOL could be both the content provider and the conduit, retaining (and even gaining) users, and making money.

Very few people in a modern company have, as their job description, ‘Make money’. The CEO usually does, and perhaps one or two others at the very top of the corporate pyramid. Under them, there are hundreds of vice-presidents whose job description is something like ‘Make money by doing some quite specific thing’. The promise of the AOL Time Warner merger never was fulfilled because these vice presidents, when faced with the choice of doing what was best for the new merged company overall or doing what was best in the short term for the department they happened to be running at the time, chose the short-term gain. And the upper management of the company, for whatever reason, would not or could not effectively overrule them.

I’ll repeat that: the AOL Time Warner merger failed overall because the company was unwilling to cannibalize certain of its existing businesses in order to make more money from the same product through different channels.

And Ms. Postrel, whose main message is that a lot of people tend to cling to the familiar even when this really isn’t in their interest — suggests that this situation would have been better, not worse, had this been attempted though ordinary contractual means. That the Time Warner VPs would have gladly had their businesses diminished as part of a joint-venture with another company, when they wouldn’t do it for another unit of their own.

All day, NPR news has been reporting that the North Koreans “attempted” to “force down” the U.S. spy plane that they intercepted yesterday.

NPR quotes an unidentified U.S. official who is “familiar” with a videotape of the incident, presumably taken from the spy plane. He’s quoted as saying that a North Korean can be seen waving his arm in a downward direction, and that one of the North Korean pilots activated his targeting radar.

He continues to say that the fire-control radar was not activated, but that this doesn’t matter because the Koreans were armed with heat-seeking missiles. And that this doesn’t matter anyway because the range was so short that the Koreans could have shot down the spy plane with their cannons. (I’ll add links and direct quotes here if and when I find a print source for the same information; I haven’t yet been able to.)

None of this makes the slightest bit of sense, either as an account of actual events, as a governmental information release, or as a news story. #7 is particularly idiotic; in a story where we’re given information about several ways in which the Koreans could have shot the plane down, but didn’t, it’s hard to conclude that they “attempted” to force the plane down.

I’m willing to accept that actual events don’t always make sense. But the point of a government leak is to spin the account of events in a direction favorable to your point of view, and the purpose of a news organization is to make sense out of random information. Neither of those things has happened in this case. NPR has taken this spaghetti mess of a leak and is reporting it in what looks like unedited form.

Do these pictures of Khalid Shaikh Mohammed, pre- and post-arrest, remind anyone else of the pictures of the Leader of the Movementarians, before and after the cult bought KBBL TV? 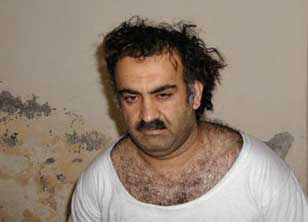 This is the guy that Time magazine describes as

al-Qaeda’s agent 007: suave, well educated, a trilingual globe-trotter who mixed easily in other cultures, who engaged women and intrigue with savoir faire and deadly expertise.

And people wonder why there haven’t been more attacks. Even Roger Moore stood up better under pressure.