We all know that things have been tough lately over at AOL Time Warner — and nowhere has it been tougher than at CNN. Most of the ads they’re showing these days seem to be for other units of AOL.

Anyway, they have now gone off the deep end in an attempt to raise some money. On their website, they’re running ads and billing them as “news”. Here’s a picture: 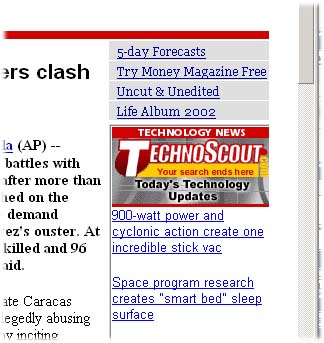 Newspapers — even the NY Times online, which runs a list of little text ads in the same place on the screen as CNN — are careful to always mark advertisements as such. It’s an incredibly basic part of journalistic ethics; any ad that could possibly be mistaken as news content by even the dimmest reader are labeled. Here, though, we have CNN doing just the opposite.

Either CNN has become so sloppy that they’re not paying any attention at all, or they’re so desperate for money that they’re willing to sell their reputation.

One way or the other, it’s not a good sign.

I cannot adequately express the incandescent stupidity of this. The BBC quotes Bush as saying:

“As we seek to preserve human life, we must also preserve human dignity - and therefore we must prevent human cloning by stopping it before it starts.”
[…]
The president said that anything short of a full ban would be unethical, and nearly impossible to enforce.

There are two problems with this line of thinking.

First, it’s restrictive of basic research based on nothing but the opinions of the powerful about the moral acceptability of that research. Once upon a time, research into the idea of a heliocentric solar system was seen in the same light.

For Bush et al.’s moral qualms to have any weight, we have to assume that an amorphous blob of cells with the capacity to become a human being has the same moral standing as an actual living, breathing, conscious being (but not a conscious being convicted of any of a number of crimes that carry the death penalty). That’s a real stretch, even for the GOP. You might be able to claim ‘humanity’ for a fetus, if only because it looks like a human. But an embryo?

Using that logic and moving backward just a few weeks or days in time, every woman in the United States should be prosecuted every time she fails to get pregnant and has her period, since this represents the death and destruction of a potentially-viable human egg. Actually, it occurs to me that there are factions withing the GOP that would probably welcome a move to force women to be pregnant all the time, but that’s another rant entirely.

Human culture does recognize that the mere potential for reproduction is important and to be protected. (Orson Scott Card touches on this potential as a reason for the value of life in Ender’s Game. The enemy, a race of space-bugs, does not even notice the death of millions of its sterile soldiers, but cannot even fathom the idea of the death of a single Queen Bee, who alone has a genetic future.) But recently we seem to have stepped off the deep end in attempting to justify the particular odd logic behind the GOP’s anti-abortion stance in the US.

And anyway, none of that matters, because

Second, the United States government cannot control the progress of science. As powerful as the United States is, politicians in Washington have not yet perfected the mind-control ray that is necessary to make the Thought Police a practical reality.

All this move will do is ensure that research takes place outside the United States, and that the opportunities, cures, and money are available to foreigners and not to Americans.

The EU is reportedly considering economic isolation (from the EU, anyway) of Israel to put pressure on it to leave the Palestinians alone.

Question. If the Palestinian Authority is ultimately a terrorist organization — and it appears to be — and if the EU is doing things to support it, does not this mean that the EU is ‘harboring’ terrorists? Exactly what ‘harbor’ means in this context is very hazy — which is why Bush used it, I think — but it seems to me that ‘using one’s political and economic power to allow unfettered operation’ definitely qualifies.

So should we expect to see the USS Enterprise sitting off Oostende soon, launching attacks on Brussels?

Yes, I know, there hasn’t been anything new here for a while. I’ve been busy beating my head against computers. When the Tino Unified Media Player is working, you’ll be able to see what I’ve been up to. I’m afraid it will be fairly anticlimactic.

I have also put together a Domokun Buying Guide to help answer the questions that just pour in via e-mail.

Everyone should read this article. Effectively it’s about how the Bush administration is weaseling out of considering Yassir Arafat a ‘terrorist’.

Bush said Monday that the Palestinian leader’s past as a peace negotiator exempts Arafat from the post-Sept. 11 U.S. policy that a country or entity that harbors terrorists will be dealt with as terrorists.

Under the post-September-11 doctine, Arafat clearly at least ‘harbors’ terrorists, because he doesn’t swiftly, loudly, and consistently denounce terrorists fighting for his cause, and he does not appear to move to arrest those under his authority who commit or plan acts of terror. That he’s won the Nobel Peace Prize doesn’t enter into it. At worst, he’s a murderer; in the very best possibility, he’s an ineffectual figurehead of a leader who cannot make meaningful promises.

If Arafat has any kind of authority to negotiate for peace between Palestinians and Israelis, then he’s responsible for the recent bombings. If these bombers are not within his control, he’s not worth negotiating with. Either way, the path to peace in the region does not lead through Arafat.

Colin Powell put a little different spin on the same topic on CBS this morning, saying “It would not serve our purpose right now to brand him individually as a terrorist.” That’s a very different statement, and it hints at a strategy. I sure hope so.

Update: maybe this information will help the U.S. government to decide whether Arafat deserves an ‘exemption’.