June 2006
Media
The Problem In A Nutshell

MSNBC is running coverage of the passage of a new law in West Virginia, which requires the use of gadgets that will allow location of, and communication with, miners.

Their headline for this story? 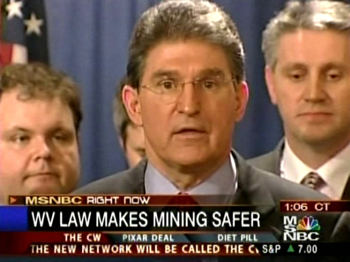 But of course it isn’t the law that makes anything safer: it’s the gizmo. The law just requires use of the gizmo. My guess is that the gizmo isn’t as useful as it’s being made out to be, or it would have already been in use. There’s a popular image of coal miners as being seen as disposable by the greedy capitalist pigs that run the mine companies, but this doesn’t actually seem to be the case.

Coal miners don’t come cheap, in part because the work is dangerous. The coal companies wouldn’t be too stingy in deploying anything that would allow them to hire more miners, and to hire at wages that reflect a lower danger premium.

Or maybe it doesn’t suck at all. It certainly doesn’t crash all the time any more: 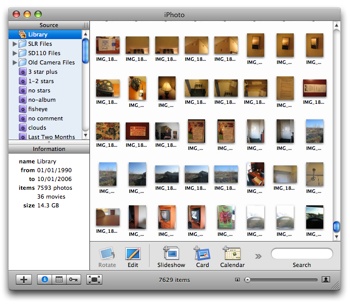 He wanted them to open their books during the three-week break because he feared that some would forget things they had learned.

Between 750 and 1,000 students had not completed assigned holiday homework upon returning to school Monday, and hundreds of them were suspended. There are about 5,770 students in the Lancaster school district.

ATTENTION EMPLOYERS AND COLLEGE ADMISSIONS OFFICERS: Be sure not to hire or admit any products of the Lancaster, TX school system more than three weeks after graduation. The head of the school system himself does not believe that anything they teach those kids will stick any longer than that.

I’ll give them credit for at least having ‘zero tolerance’ for, you know, poor academic performance, rather than random and pointless ordnung. But I have to question not just their logic but their sanity on two points:

First: If your students are really forgetting things they’ve learned after three weeks, does it even occur to you that maybe your education is not all that effective?

Second: Does it really make sense that the punishment for not doing schoolwork should be not being allowed to come to school? Is that going to be an effective punishment? Or is it more likely to make the problem — or at least the problem as the school people see it — even worse?

If they forget what they’ve learned in three weeks, how much more are they going to forget while they’re suspended?

One of the biggest news stories of last week was an explosion at a mine in West Virginia that killed 12 miners. This happened not all that far from Washington, D.C., home of The Washington Post.

What happens when you search for ‘miners’ on the Post’s website right now? 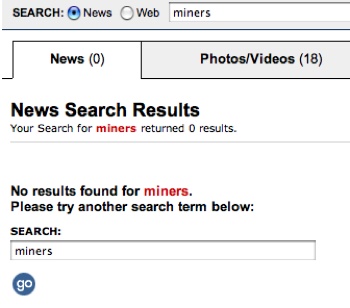 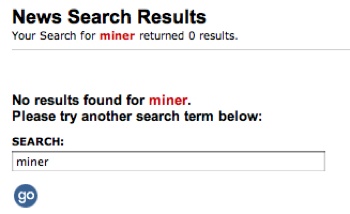 Nope. It just sucks. It works some times, but the index just disappears pretty often — and when the thing is out of commission, there’s no notification of this: just ‘no results’. Lovely.